If you have met Don Ball, you know what a great storyteller he is. For that reason and rightfully so, I could start this spotlight like all the good storybooks do with phrasing such as "Once upon a time..." or "In the beginning..." which always sets the stage for a great plot, climax, and usually a moral/lesson to be learned before the perfect storybook ending. For on July 2nd, Don, Bunny (Mrs. Ball), and the entire Business Machines Company (BMC) family celebrated a milestone that many businesses long to achieve - 30 years in business. To commemorate this special occasion, I talked with Don about his personal and professional journey. I believe you will find in his story wisdom and encouragement for your storybook ending.

Before there was BMC, there was Don and Bunny, high school sweethearts at Franklin High School in Franklin, Tennessee. At some point, Bunny's family moved to Kingsport. To be close to Bunny (and probably to save money on gas!), Don ended up working in Johnson City until they wed on May 14, 1977. So, yes, this year the happy couple also celebrated their 35th wedding anniversary in addition to 6 years of courtship!

In 1981, the married couple moved to Knoxville, and Don interviewed with Advanced Office Systems. He worked there for one year before realizing that he wanted something more. He talked with his boss, shared his heart, but inwardly he still wrestled with what to do. In the end, Don's entrepreneurial spirit won. He knew it would not be easy, but he wanted to try to do his own thing and so he did.

On July 2, 1982, Don and Bunny took $100 from their personal checking account and started BMC with the first copier sold in the back room of Omni Printing that used to be on Magnolia Ave. In the beginning Don was buying his equipment from an old boss in Nashville. Four months later, he hired a service technician and sold a 3-year rental agreement for 30 machines to Knoxville City Schools. At that point, it was clear to Don that he had made the right decision. BMC has become the fastest growing business machines company in Knoxville and the largest Kyocera Mita Dealer in Tennessee. Reflecting on the past 30 years, Don credits his team and says, "The good Lord has been looking down us. We have been blessed." Don appreciates his team, many of whom have been with BMC for 26 years (average 10-15 years), and insists that his service and administrative staff are "head and shoulders above the rest."

Dedication, community service, and application of the golden rule is the winning strategy that has turned this one-man operation into the $5 million+, 22-member team it is today. Having earned the titles “Global” and Gold Medallion Kyocera Mita Dealer, BMC helps its customers increase productivity with high quality equipment and service. “It’s a team taking care of the customer,” says Ball. “We want people to feel comfortable doing business with BMC, so around here our motto is ‘Service, Service, Service.'"

Of course, like most startups, BMC struggled to have enough capital in the early years, to compete with established businesses while being a new kid on the block, and then have employees leave to compete, but Don took it all in stride with his credo, "Take the good with the bad and keep going," which is great advice for small business owners and startups that fight to stay in business especially in economically trying times. With strength of character, Don lives by the Golden Rule. Even when he left Advanced Office Systems so many years ago, Don never called on their clients. He also finds inspiration from a quote by Admiral Ricker on a plaque that has hung in his office for years, "Great minds discuss ideas. Average minds discuss events. Small minds discuss people." Admirably, I cannot remember one time that Don has ever said an unkind word about anybody - a rare find indeed. 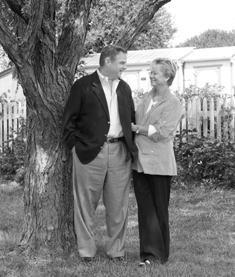 Personally, while Don was starting the business, he and Bunny learned the hard news that they were not able to have kids. It was devastating. As they worked through it, they grew in their faith and communication and eventually decided to pursue adoption. Their first child, Geoffrey, was adopted from Brazil. In 1984, the excited parents-to-be traveled to Brazil to pick up their three month old baby boy and stayed there for three weeks before they could bring him home. Then, in 1987, Bunny got a surprise call from Holston Home for Children with some more good news! Soon thereafter, the couple welcomed their daughter, Alison Nicole (Nikki), into the family at only seven weeks old...together at last!

Family is important to Don, the baby of five kids. When he was only 11, Don lost his father and brother in a car accident. At first, Don thought "Little Howard" only had a broken leg, but upon arriving at the hospital Don found out that his brother had a hole in his lung and later died. Don described his dad, who worked at the phone company in Nashville, as personable, the type of man who never meets a stranger. In fact, Don remembers the family receiving letters from the Governor and Mayor when his father passed away. Even in his absence, Don's father left an indelible impression on him. Like his dad, Don is one of the most sincere, genuine people you will ever know. Always the consummate gentleman, he exudes charm and goodwill. In the first few minutes of meeting him, you will be amazed at his personable nature, gift for connecting with people from all walks of life and developing meaningful relationships. He always asks about your family. Bottom line is that he cares.

Service As a Way of Life

Don approaches service as a way of life. Among his community involvement, Don enjoys BNI and is a board member of Farragut Chamber of Commerce, but his passion is the Dream Connection, a non-profit organization dedicated to fulfilling the special dreams of children ages 3-18 who are faced with life threatening or chronically debilitating illnesses in the East Tennessee area since 1985. Don and Bunny serve on the board. The entire organization is made up of volunteers so that means that 100% of the funding goes to making kids' dreams come true, of which Don is especially proud. The stories are amazing, and there are many exciting things in the near future including a '5K Running for a Dream' on November 3, special fundraising initiative on WIVK 107.7 in December, and Dr. James Choo's journey to climb Antarctica's highest peak, Vinson Massif later this year. Reaching more than 16,000 feet into the sky and raising one dollar per mile for the Dream Connection ($4000 already raised), this mountain will help more dreams come true.

During the holidays at BMC, Don, Bunny, and the entire BMC family host an annual Christmas Party for kids from local group homes. Like Santa and his elves, they make a list and check it twice. Each child receives a gift. The team throws a party to remember with food, gifts, photobooth, and games. This past year, Don recalls hearing a little boy who described his new navy wool jacket as "the nicest jacket I've ever owned." Don says, "It's enough to make you cry!"

Impressed yet? As I talked with Don and began to write this article (which has quickly become a book!), I became increasingly aware of how much Don packs into his life. Yet he does it all with grace and a sense of ease and purpose. Between work, friends and family, church, community service, trips in his RV to UT games... somehow he has found balance. He knows what is important in life. If a friend is in need, he stops everything to be there. He is present.

Likewise, his advice to small business owners starts with balance, "You have to find life balance - whether it be spiritual, work, family, friendships, church..." Perhaps some of his best advice is spurred by his frustration with the UT football team, "You have to have the right attitude, line up, and play. Put the product on the field." As a family business owner responsible for the direction of your company, Don advises, "Keep a visual picture in mind of where you want your company to be. At the end of the day revisit and make sure you're on track," and as far as managing people, "Hire people in whom you can trust and depend and give them the power to make decisions."

Looking Ahead: The Next Chapter of Life

After 30 years in business, BMC is still going strong! Within the next 3-5 years Don foresees buying smaller dealers with possible expansion into the South with a branch in the Chattanooga area. However, he quickly asserts that good management will need to be in place. Of course, his primary goal has and always will be to take care of customers, because "Everybody can buy a copier, but you can't buy peace of mind." He also desires to lead the industry in digital integration as that area continues to evolve.

As far as Don's personal legacy, he's a firm believer in the axiom, "It's not what you've done, but who you've helped." He hopes to be known and remembered as an honest citizen, always trying to do the right thing, and in the end, helped self and helped others.

From high school sweethearts to 35 years in marriage and 30 years in business together with highs and lows in between, Don and Bunny have made a life that has the best components of a good storybook. Within this story there is wisdom for your life. Ultimately, the moral of this story is up to how you want your life story to be told.